This project was conducted as part of the R&D team inside a startup over a period of 6 months. My role was primarily that of an industrial designer, but in later stages I was also in charge of writing the code for transmitting and analysing data.

The objective of the project was to create a system that could provide valuable insights for managers of manufacturing plants. The targeted facility types encompassed everything from injection moulding to sheet metal perforation.

The initial idea on how to achieve this was to gather data by equipping each machine with multiple sensors. These would then send data to the cloud where it could be analysed. Useful insights around the functioning of a machine, or the plant as a whole would then be relayed to the manager through a web application that could be accessed from any device.

The two large questions posed at the outset of the project were:

In order to answer these questions the team decided to arrange factory visits where conversations could be had with both machine operators and managers. The research was conducted through semi-formal interviews. In these discussions some prepared questions were asked, but for the most part the conversation centered around talking points that the interviewees themselves brought up.

Observation of the factory floor was also used to get an understanding of the workflow of operators.

The results from the interviews and observations can be summarised into the following points:

From talking to floor managers we understood that they were most interested in basic information such as:

A noteworthy finding was that many managers used webcam streams of machines to remotely check on their status. This ad-hoc solution left a strong impression of a real need for smarter data retrieval and visualization.

The central conclusion drawn from the user research was that it would be inconvenient for operators to install and manage several sensors for each machine. This finding led to the decision of only using one multi-purpose unit that would include a variety of sensors. This unit should maximize battery life in order to increase the interval at which the operator has to charge it.

After talking with managers it was also decided upon that only descriptive information would be displayed in the web application. Predictive and prescriptive type of feedback would be implemented once there was a robust data gathering and analysis architecture in place.

Selecting Which Sensors to Include

“What do all manufacturing machines have in common?”

All manufacturing machine interact with matter. The two primary ways of doing this were identified as:

The initial plan was to include an accelerometer sensor and a photoresistor to gather data on both types of matter interactions. However in the end the photoresistor was discarded as a measure to reduce complexity of the first product version.

Apart from the accelerometer, a humidity and temperature sensor were added to gather data on aspects that could affect high precision machines.

The primary objective of the physical design was to create a device that required no user-manual. It should be intuitive to an extent where the operator would not see it as a burden. Due to the rough working environment it was decided upon that the device should also be dust- and water proof (IP67 rating).

With these requirements in mind a number of sketches were made that explored both the general shape of the device, as well as methods for achieving the required water tightness. 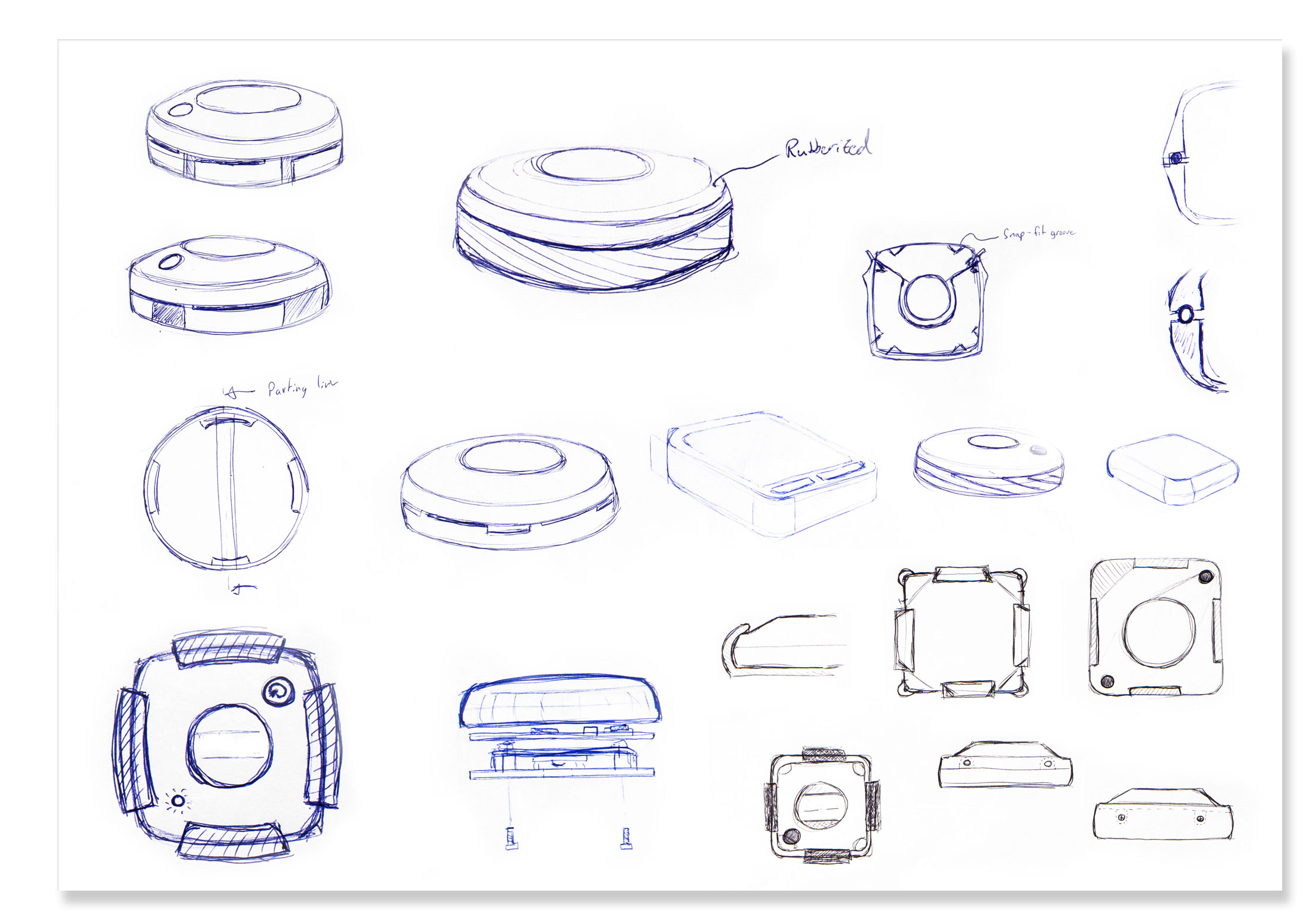 After much iteration and prototyping a concept emerged that fulfilled the requirements in a pleasing form factor. 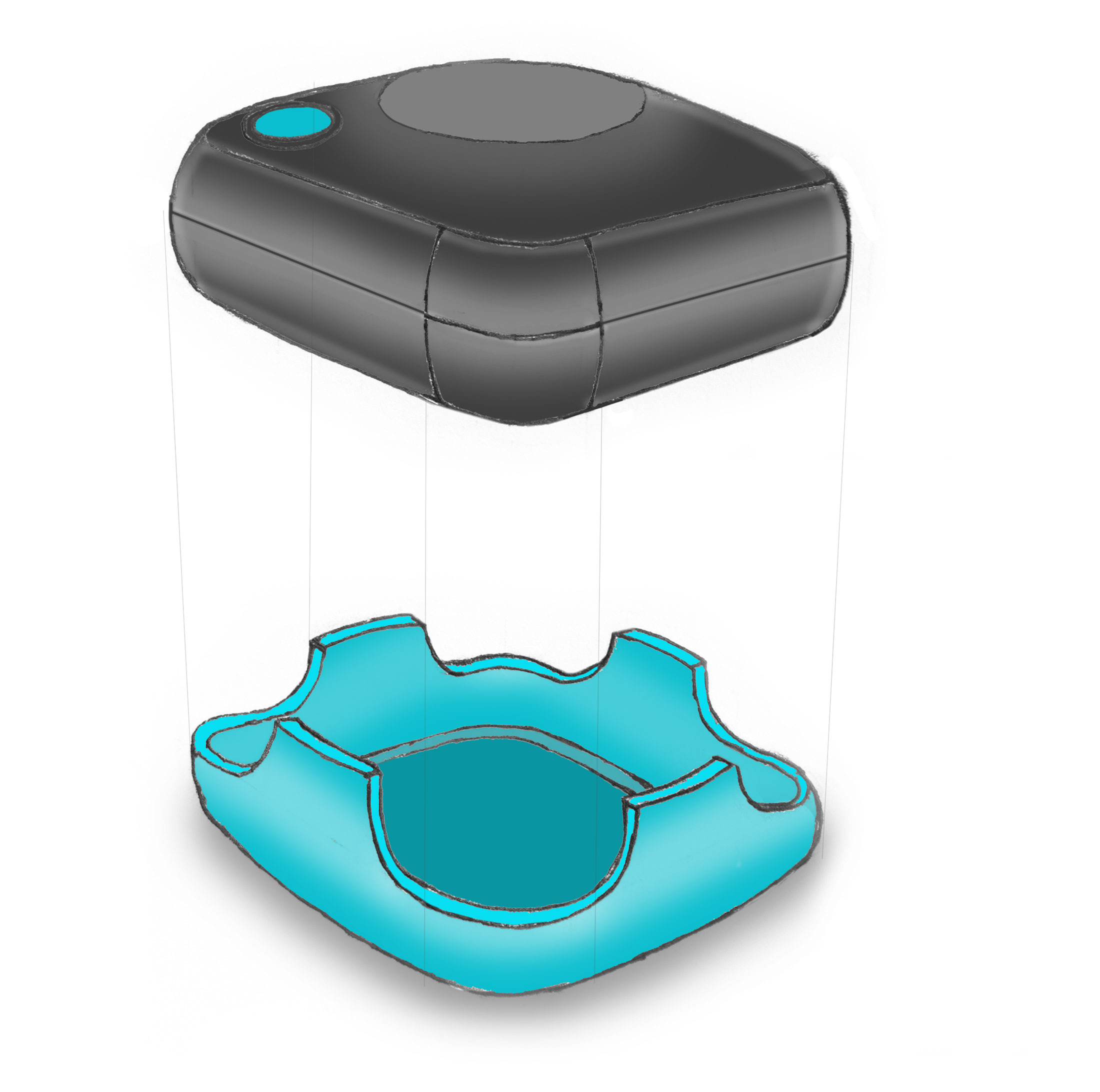 The final design takes the form of a slightly bulging square that lofts into a circular platform on top. This allows for compact fitting of the battery and PCB while creating a prominent display area for the logotype of the company. 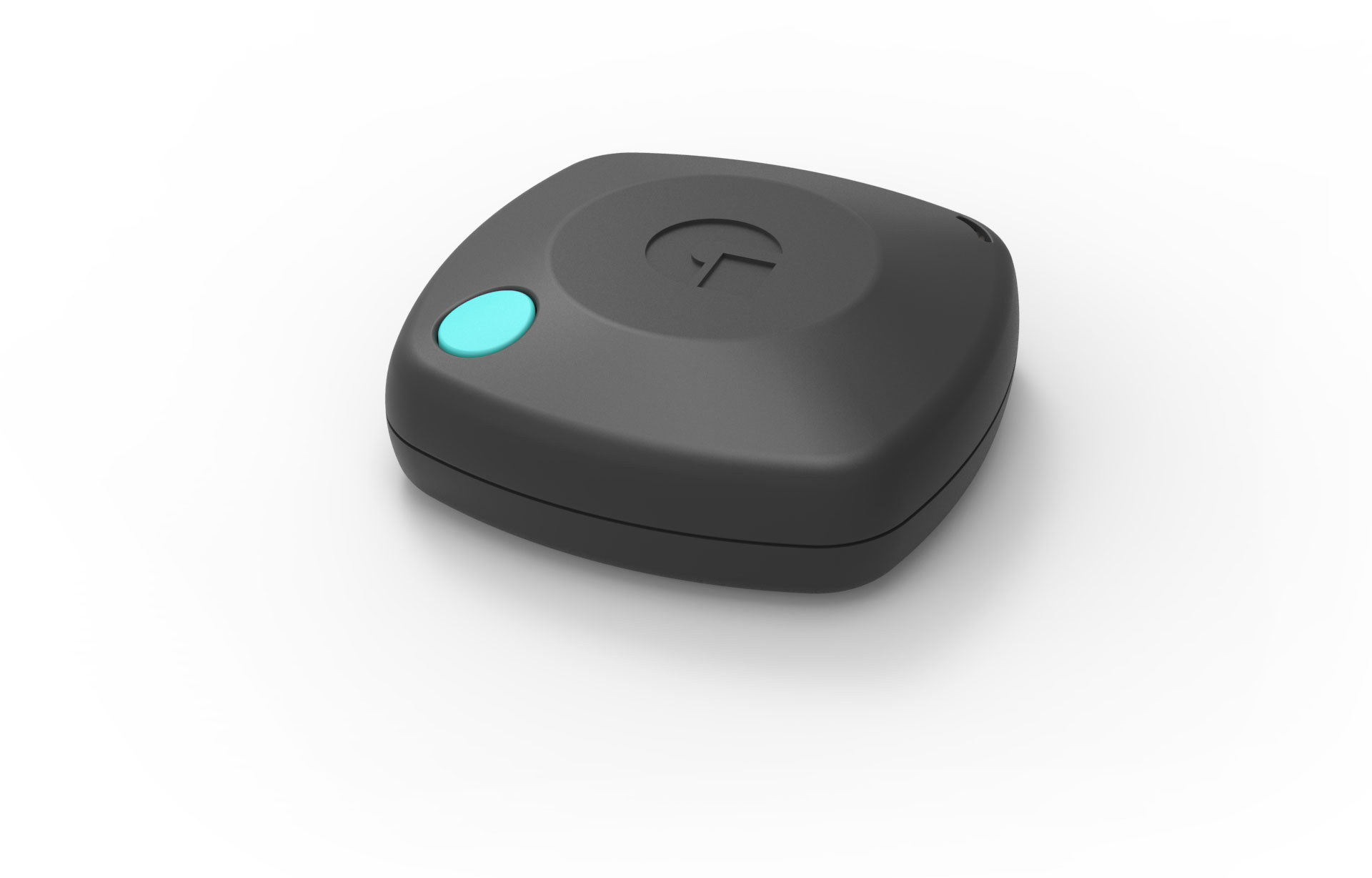 A small device is able to attach to machines more easily without adding significant momentum to the movement. On the other hand a unit that is too small would not be able to fit a battery of adequate size. The final size is the result of balancing these two requirements carefully.

The selected Li-Ion battery would allow for approximately 4 months of operation before recharging.

The device can be used with minimal training and without consulting a user-manual. This is a breath of fresh air for machine operators that are used to working with equipment that requires months of training for complete mastery.

The installation process has been simplified to two steps, one of which the operator only has to do once.

The first step consists of attaching the plastic holder using the included strong-bonding adhesive tape. The holder should be attached to the moving part of the machine in a place where it does not risk being damaged. 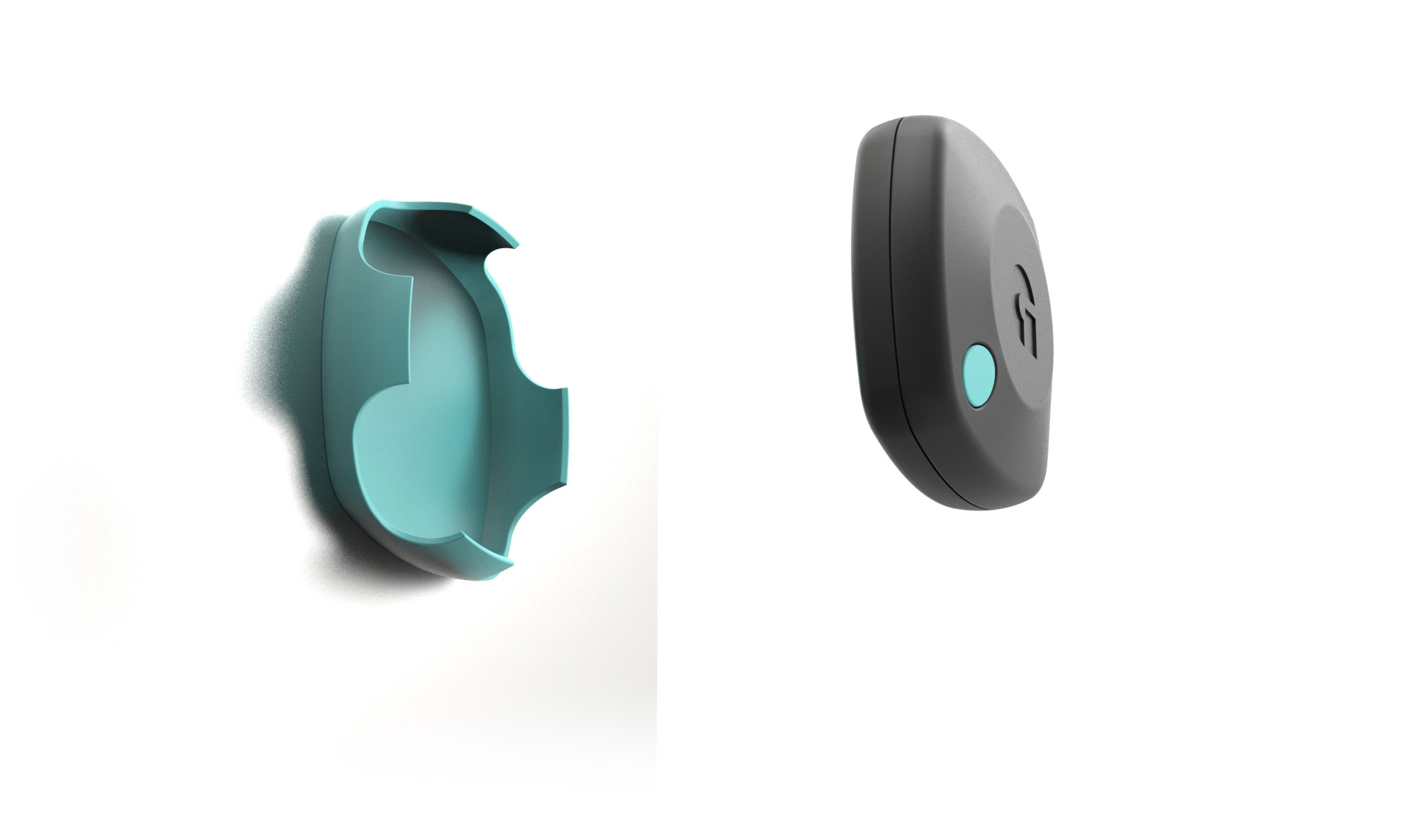 The next step is to attach the main unit by pressing it into the holder from the front. The snap-fit arms on the holder will flex and lock the device securely into place. The accelerometer is calibrated in such a way that the device can be mounted in any orientation and still work properly.

The device has the following three modes of interaction that can all be accessed through a single button:

To decrease the number of possible failure points of the water tightness the device uses wireless charging instead of a standard cable port. This choice has the added benefit of making the device easier to handle while wearing protective gloves, something that is common in factories. 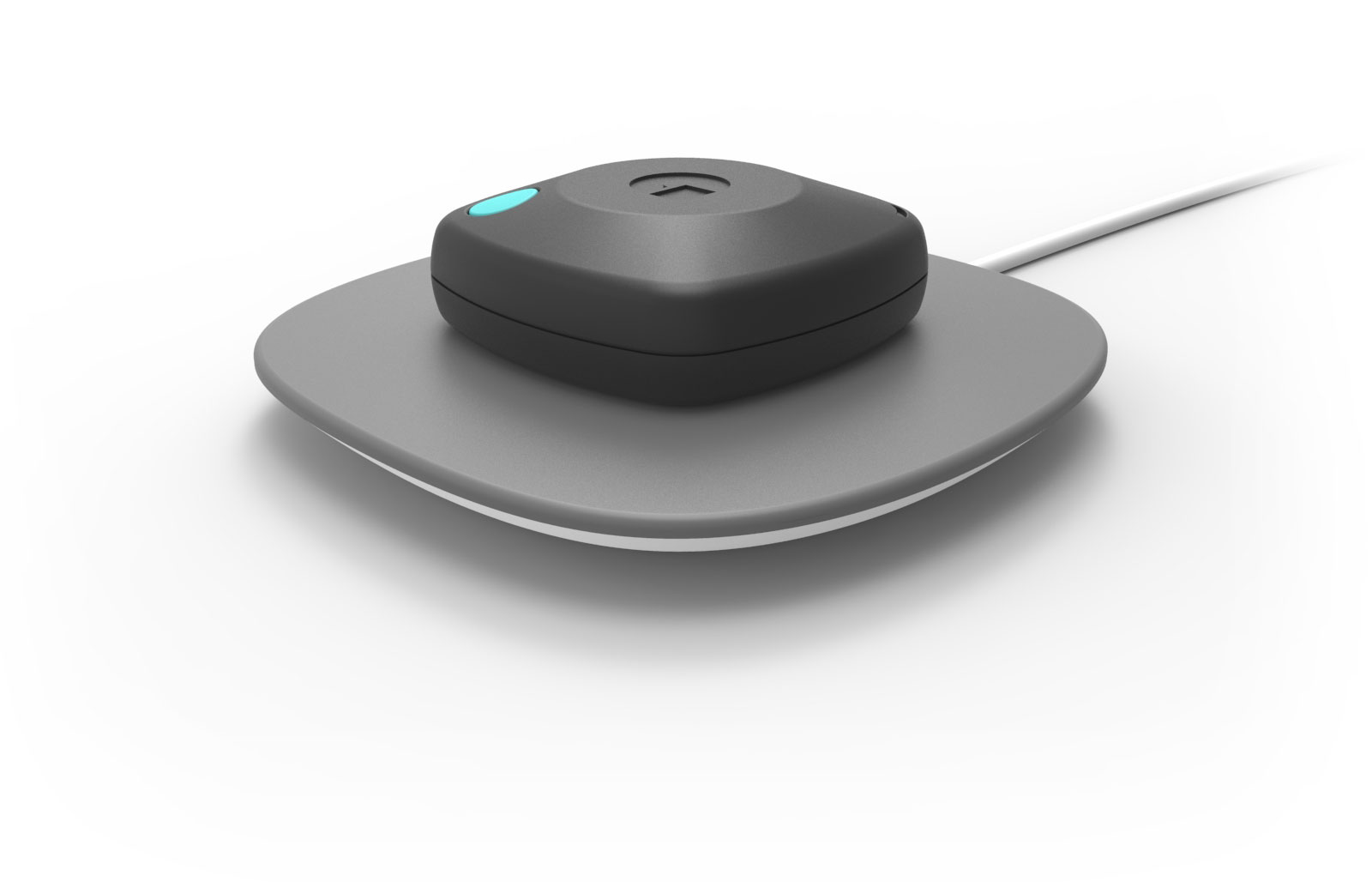 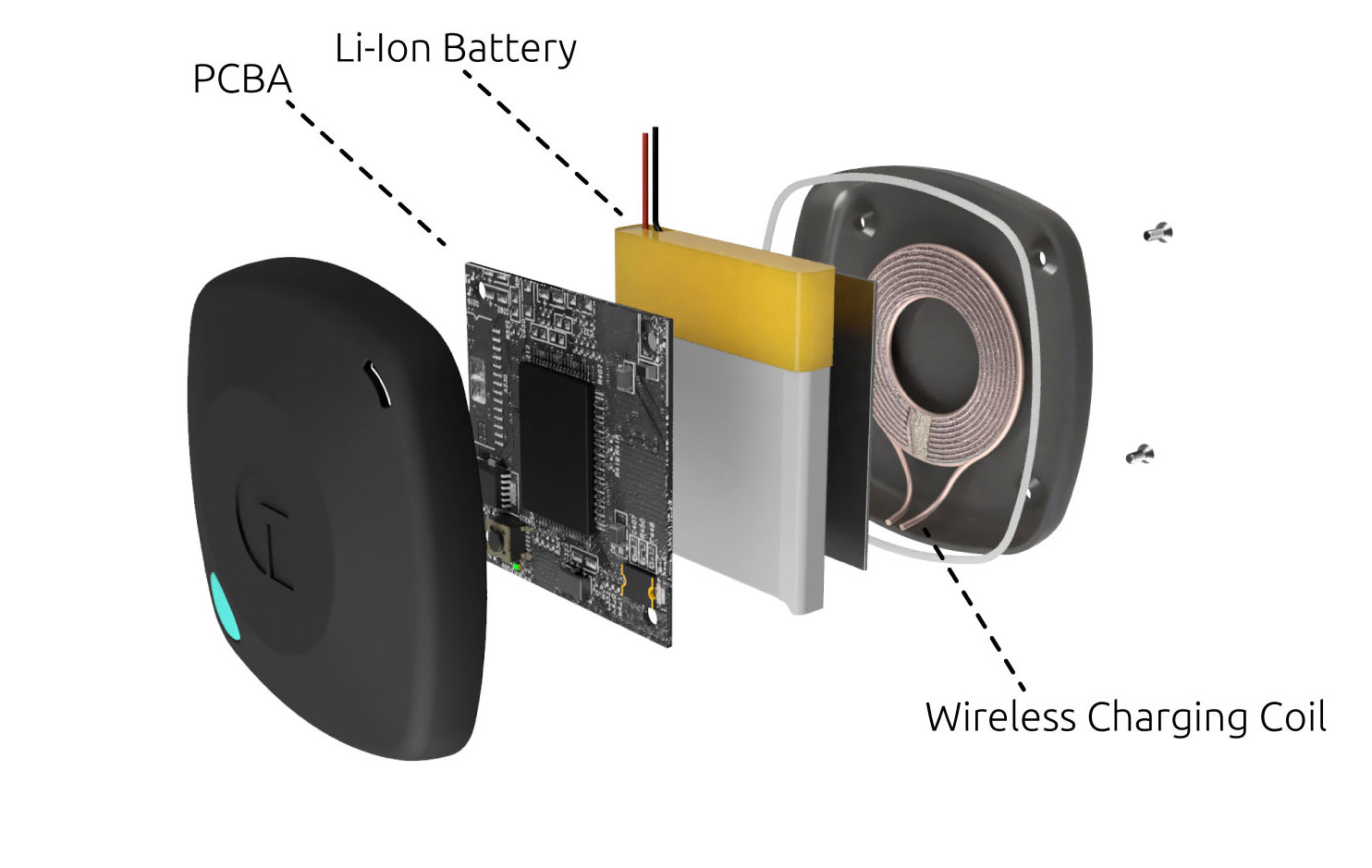 The dashboard is the web interface in which the machine operator or manager is able to get valuable insights from the data sent by the sensors. This includes information about:

All of this information can be viewed in a web application that is accessible from any device. 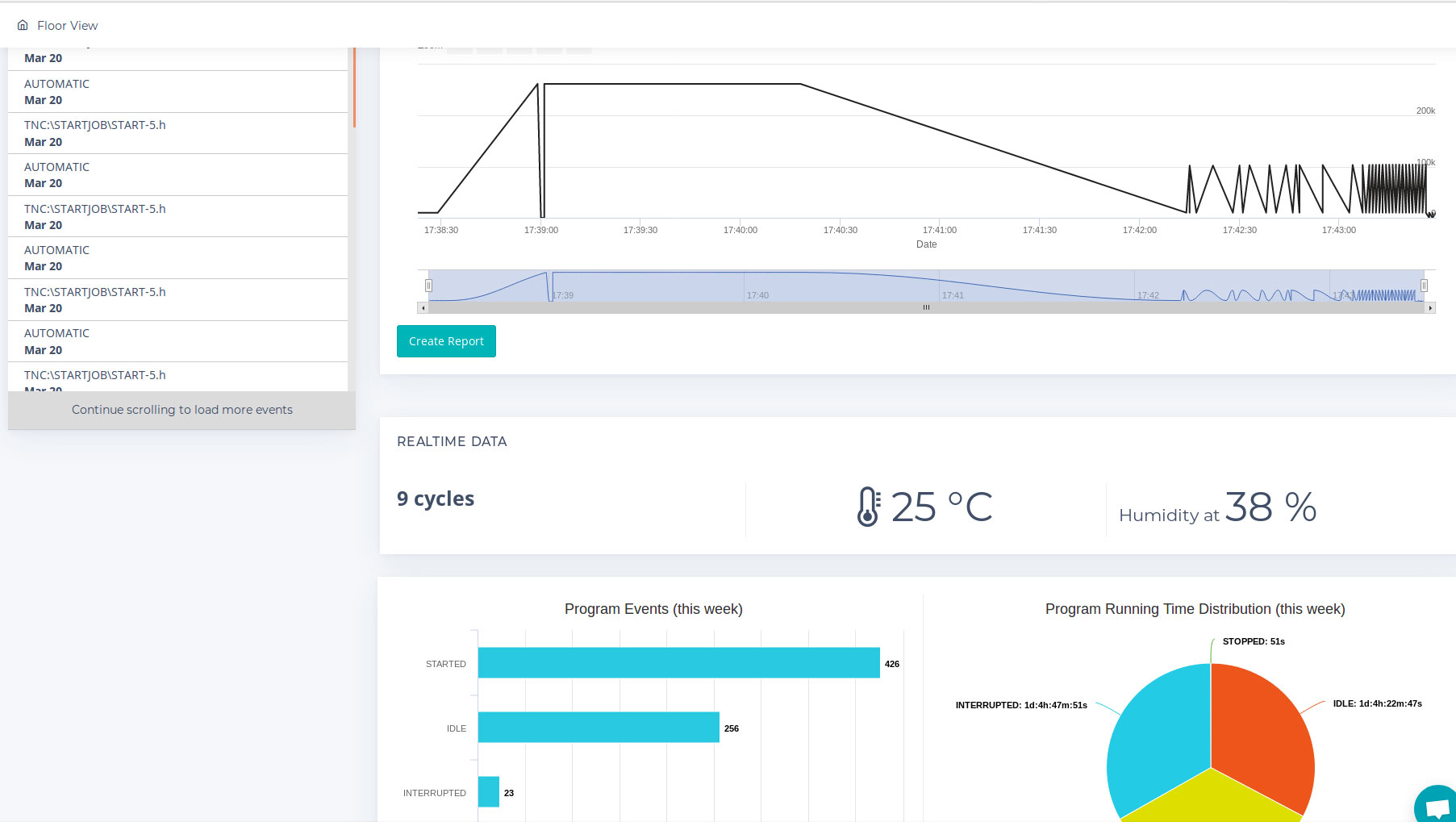 From this point on I will be discussing my contribution to this project as a programmer. The work was done towards building a MVP, therefore many of the techniques used would have to be modified before a commercial rollout.

The most important factors when selecting which data transmission protocol to use were:

At the end of a long process of weighting the strengths and weaknesses of different protocols against each other it was determined that Bluetooth Low Energy (BLE) was the best one for our needs.

BLE has a sufficiently fast data transmission rate for our needs as well as a connectivity up to 30m with the chip-set we used. Also the protocol is energy efficient when data is sent intermittently rather than continuously.

To extract the data from the sensor unit it was necessary to setup a gateway with internet connectivity. The gateway would be able to connect to multiple sensor units at the same time, forwarding their data to online servers.

For this early stage of MVP development a Raspberry Pi 3 Model B was used due to its built in BLE capabilities. A Linux system was installed and through a Docker environment the necessary connectivity code was run on boot up.

The data gathered by the sensor unit was divided into two categories by the gateway: hot- and cold data.

Hot data was everything that needed to be analysed and displayed to the user within 5 minutes or less. This included the machine state (idle or running), as well as the temperature. Cold-data was everything that could be used for more long term insights. Depending on which type of data it was the information either went straight to the server, or was analysed before being sent off.

While the temperature and humidity data could be displayed to the user with minimal post-processing, the accelerometer data required significant analysis to transform into meaningful insights.

The objective of analysing the movement data of the machine was primarily to understand how many cycles it had performed. Since the types of machines that the sensor could be installed on varied greatly, it would have been difficult to hardcode logic for determining which machine type it was currently attached to. 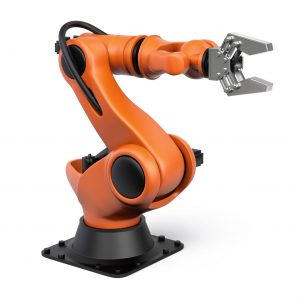 To solve this problem a unique “signature” was created from the accelerometer data feed. This signature consisted of mean values over a set time span, as well as the result of a fast-fourier-transform (FTT) which identified the length of an operation cycle, i.e. the time it takes for the machine’s motion to have repeated itself fully.

Once the sensor unit had calibrated and determined the cycle time and motion-signature, it was easy to determine the machine’s state and the number of cycles it had run. All of this analysis was done on the gateway hardware in order to provide near-to-realtime feedback to the machine operator.

The final design can be used without any instruction manual or training. Thanks to the smart data analysis that is run in the background the device can give useful insights on a large variety of machine types without the operator having to do any configuration. 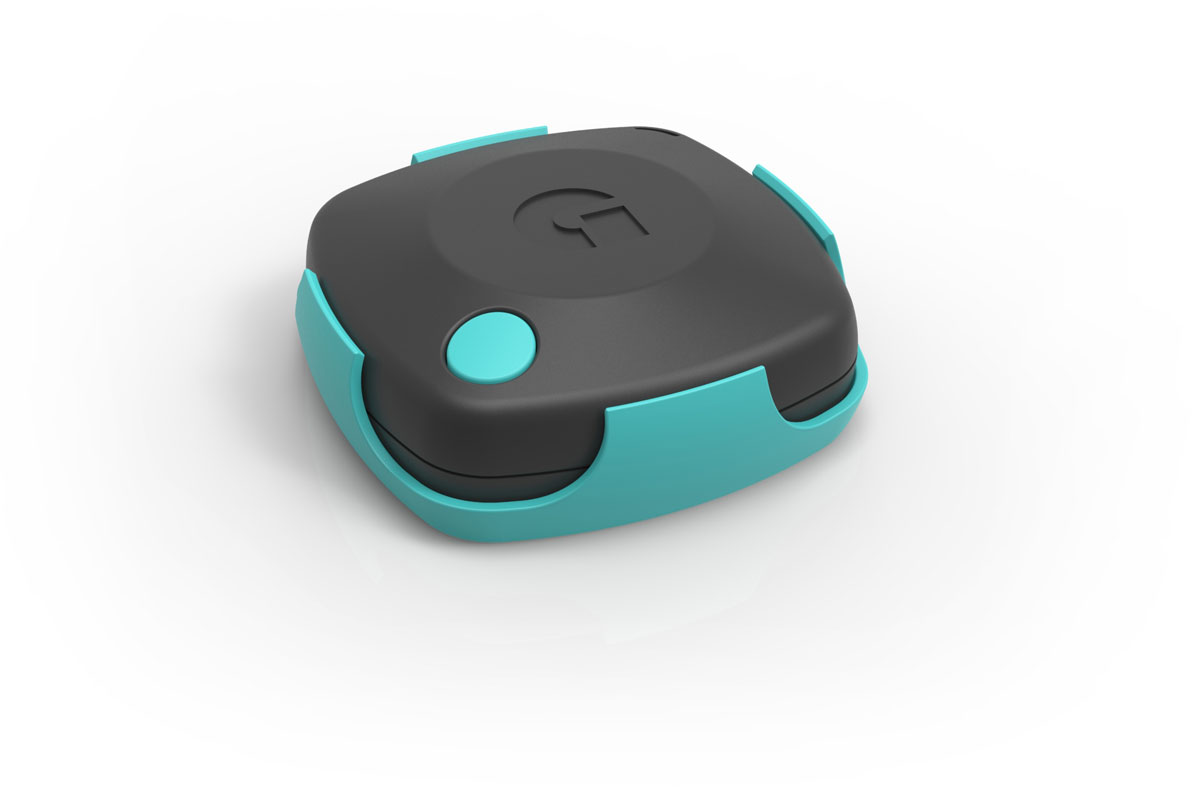